Spirits of the Red Sand's off-site Traditional Aboriginal Cultural Performance is a highly customized and uniquely engaging event that will ensure your guests experience a powerful connection to the world's oldest living culture.

Three elements are included in your experience, which usually is up to 1 hour.

1. Traditional Welcome To Country - performed by an Elder to the haunting sounds of the didgeridoo

3. Song and dance performance - sharing stories that depict Dreamtime, hunting and gathering and the Mirijan way of life (the people of the Stars)

In traditional Aboriginal culture, Elders are custodians of the ancient knowledge and customs and are charged with the responsibility of providing guidance to the community on cultural matters. It is the Elders who hold the traditional history, know the culture and pass on laws that govern the community on which their bloodline represents.
A 'Welcome to Country' or 'Traditional Welcome' is where the traditional Aboriginal owners welcome people to their land at the beginning of a meeting, event or ceremony.

This Traditional Cultural Performance starts with a Welcoming song and dance by the Traditional Custodians of Brisbane Ipswich, Redlands and Gold Coast areas, it is then followed by various song and dances which depicts the dreamtime stories, hunting and gathering within those areas.
One of the highlights is a didgeridoo solo where the audience can listen to the sounds of the oldest wood pipe instrument in the world. Towards the end of the performance the group demonstrate the traditional way we light fire with two pieces of wood (Fire lighting ceremony). The performance is narrated by the song man.
We encourage crowd participation, if requested, which involves picking a couple of people out of the audience to participate in various dances and
demonstrations.

A few surprises follow, but we won't reveal all....

Please enable cookies in your browser to place a booking

Please note: After your purchase is confirmed we will email you a confirmation. 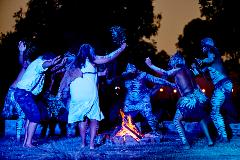